David Hu, who has two Ig Nobel physics prizes (the first for discovering nearly-universal urination duration in mammals, the second for studying why wombat poo is cubic-shaped) has a new study out with colleague Hungtang Ko, about the physics of tossing fried rice.

The study is “The physics of tossing fried rice,” Hungtang Ko and David L. Hu, Journal of the Royal Society: Interface, 2020. Here are details from the study: 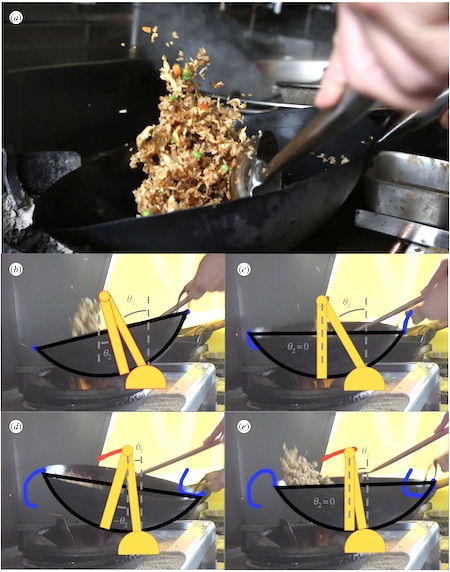 “Fried rice is a 1500-year-old dish that is prepared using wok tossing, a technique that enables food to undergo temperatures of 1200°C without burning. Tossing of the heavy wok at high speed may be one contributor to shoulder pain, which is reported by 64.5% of Chinese restaurant chefs. In this combined experimental and theoretical study, we report the wok tossing kinematics of five professional restaurant chefs. The wok toss has a period of 0.3 s and involves two directions of movement: translation, which slides the rice along the wok, and rotation, which throws the rice into the air. We report the chosen kinematics of the chefs and use a theoretical model to predict the trajectory of rice based on projectile motion. Using our model, we rank all possible kinematics in terms of three metrics: the proportion of the rice that is tossed, its flight height and the angular displacement of the rice. We identify an optimal regime for making fried rice and suggest ways that wok tossing may be improved. “