Led by Ig Nobel Prize winner Lal Bihari, the dead are rising up against their national leaders. Here’s a look back at notable happenings in 2019. The Times of India reported, on January 19, 2019:

In Varanasi, ‘living dead’ to contest against PM Modi

If Prime Minister Narendra Modi decides to contest the upcoming Lok Sabha elections again from his parliamentary constituency Varanasi, apart from the opposition he will also have to face challenge from a ‘living dead’. And PM Modi is not alone, a similar test awaits Congress president Rahul Gandhi, SP chief Akhilesh Yadav and BSP supremo Mayawati.

Mritak Sangh, an association of living people declared dead in revenue records either fraudulently or by mistake, has decided to field candidates against Modi and other top political leaders like Rahul, Akhilesh and Mayawati.

“We will field our members against these leaders to highlight the plight of the ‘living dead’ people,” Mritak Sangh president Lal Bihari ‘Mritak’ told reporters at the Rajghat cremation ground in Azamgarh on Friday…. 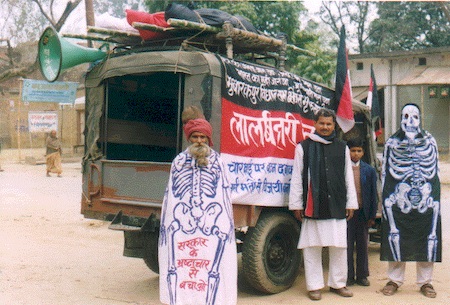 The 2003 Ig Nobel Peace Prize was awarded to Lal Bihari, of Uttar Pradesh, India, for a triple accomplishment: First, for leading an active life even though he has been declared legally dead; Second, for waging a lively posthumous campaign against bureaucratic inertia and greedy relatives; and Third, for creating the Association of Dead People.

Lal Bihari overcame the handicap of being dead, and managed to obtain a passport from the Indian government so that he could travel to Harvard to accept his Prize. However, the U.S. government refused to allow him into the country. His friend Madhu Kapoor therefore came to the Ig Nobel Ceremony and accepted the Prize on behalf of Lal Bihari. Several weeks later, the Prize was presented to Lal Bihari himself in a special ceremony in India.