An editor of the British Medical Journal (The BMJ) told us a few years ago that one particular BMJ paper, published in 1999, has—from the moment that paper was awarded an Ig Nobel Prize in the year 2000— consistently drawn more web visitors—many, many more—than anything—anything—else published in the history of The BMJ. Everything every published in The BMJ, dating back to 1840; is accessible on the BMJ web site.

Th 20th anniversary of of that paper being published is being celebrated around the world, as well as in The BMJ itself:

This Christmas marks the 20th anniversary of the publication of “Magnetic resonance imaging of male and female genitals during coitus and female sexual arousal.” Why did it become one of the most downloaded BMJ articles of all time?

The BMJ greeted the prize, in 2000, with an essay that begins:

The BMJ gloried in new laurels last week when its article on the imaging of male and female genitals during coitus, published in last year’s Christmas issue, won the prize for medicine at the annual Ig Nobel prizegiving at Harvard University (BMJ 1999;319:1596-600).

MRI Sex: The most viewed article in BMJ

This year marks the 20th anniversary of the publication of, possibly, the most downloaded scientific article in the British Medical Journal. “Magnetic resonance imaging of male and female genitals during intercourse and female sexual arousal,” it was titled…

Although in its first year the research picked up the Ig Nobel prize for medicine, at that time, nobody in “The BMJ” thought the study was particularly useful clinically or scientifically, but it contained “a striking image using a new technology, and everyone was I agree that readers might be interested in seeing it,” writes Tony Delamothe, former editor of the magazine. 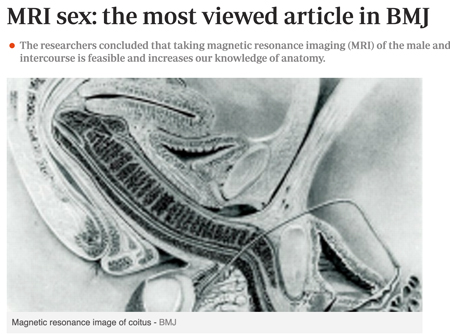 Here’s another of the many reports, this one in the German newspaper Bild: 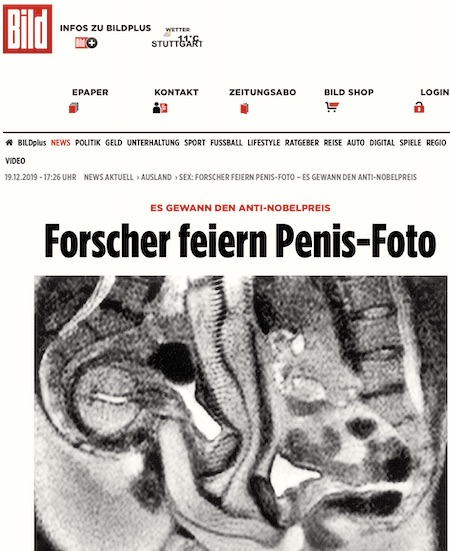 Ig Nobel Prizes and The BMJ

The Ig Nobel Prize for medicine, in the year 2000, was awarded to Willibrord Weijmar Schultz, Pek van Andel, Eduard Mooyaart, and Ida Sabelis, for their report, “Magnetic Resonance Imaging of Male and Female Genitals During Coitus and Female Sexual Arousal.”

Other studies published in The BMJ, too, have been honored with Ig Nobel Prizes. Navjoyt Ladher, The BMJ‘s clinical editor discussed this in an essay in December 2016, saying:

The [MRI sex] paper also has the honour of being the recipient of an Ig Nobel award. The prize is given each year by the Annals of Improbable Research for studies that are particularly unusual and imaginative. In her acceptance speech for the award, author and research participant Ida Sabelis described seeing the MRI images for the first time: “Not so much a passport photo for daily use but surely a shot that shows so much that it makes me speechless.”

Perhaps unsurprisingly, given the focus on quirky research questions, several other Christmas BMJ papers have also received the prize (box 1). These papers have examined the effect of different foods on the appetite of leeches, explored the occupational hazards of sword swallowing, and assessed the predictive value of abdominal pain in people with appendicitis when they go over speed bumps.

Since then, The BMJ has continued wracking up Ig Nobel wins, as you can discover (or re-discover) for yourself, by looking at the list of all Ig Nobel Prize winners.

Here’s a short documentary made ten years or so ago about the MRI sex study: