What happens inside a bungee jumper‘s brain just before the bungee jumper steps into the abyss? The answer is complicated, but one gross aspect is on exhibit in this new study:

“To jump or not to jump – The Bereitschaftspotential required to jump into 192-meter abyss,” Marius Nann, L.G. Cohen, L. Deecke, and Surjo R. Soekadar, Scientific Reports, vol. 9, no. 1, 2019. (Thanks to Tony Tweedale for bringing this to our attention.) The authors, at Charité – University Medicine Berlin, Germany, University Hospital of Tübingen, Germany. the National Institute of Neurological Disorders and Stroke (NINDS), USA, and the Medical University Vienna, Austria, report: 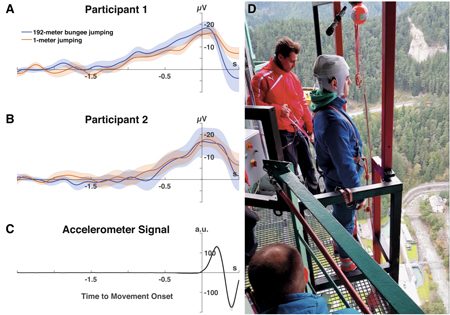 “Self-initiated voluntary acts, such as pressing a button, are preceded by a surface-negative electrical brain potential, the Bereitschaftspotential (BP), that can be recorded over the human scalp using electroencephalography (EEG)…. Up to now, the BP required to initiate voluntary acts has only been recorded under well-controlled laboratory conditions, and it was unknown whether possible life-threatening decision making, e.g. required to jump into a 192-meter abyss, would impact this form of brain activity. Here we document for the first time pre-movement brain activity preceding 192-meter bungee jumping.”

The action, and action potentials, happened at the Europa Bridge in Innsbruck, Austria.