A strange (and true) news report from 1996, about an aftermath of that year’s Ig Nobel Prize ceremony, begins:

The value of a Nobel Prize-worthy feat is clearly
established: The Royal Swedish Academy of Sciences
pays $1.1 million to winners of the coveted awards.

The value of Nobel Prize-worthy feet is harder to
fix, but two of them have evidently fallen into the
wrong hands.

At an auction in Cambridge, Mass., last month,
software engineer Nigel J. Foster says he paid $15
for a plaster sculpture of the left foot of Richard
Roberts, a biologist who won the Nobel Prize in
1993. The Roberts foot now sits on Mr. Foster’s mantel
in nearby Newton.

But another bidder, Jylene Livengood, says she paid
$30 for the Roberts replica and is its rightful owner….

Here, below, is a portion of our own report (in the Annals of Improbable Research special issue about the 1996 Ig Nobel Prize ceremony) about that plaster-pedal incident. The photo was taken during the auctioning of the several plaster-cast feet: 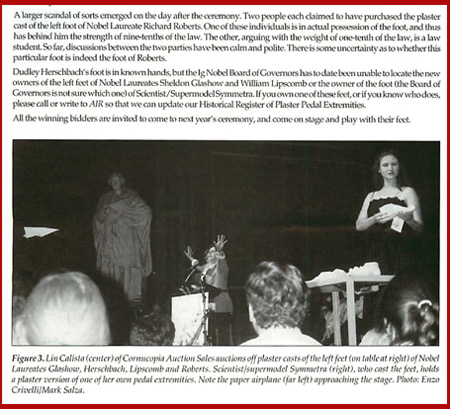 You can, if you like, watch video of the auctioning of the plaster casts of the left feet of the Nobel laureates. It is, in some sense, an historic moment.

NOTE: That 1996 Ig Nobel Prize ceremony included, in addition to the introduction of that year’s ten new Ig Nobel Prize winners, and the auctioning of the plaster feet, the very first Ig Nobel opera, which was about cockroaches and the imminent arrival of a meteor that might destroy all life on earth (with the reputed exception of the cockroaches). Each new Ig Nobel ceremony, in subsequent years, has included the premiere of another new mini-opera. Here’s video of the entire ceremony: