The tree-growth salmon were flung mostly to one side of a stream—and mostly not flung to the other side—over a period of twenty years.  The salmon carcasses apparently made excellent fodder for the trees that grew on the salmon-carcass laden side of the stream. 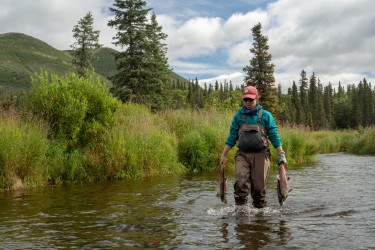 The University of Washington News explains:

… After counting a dead fish, researchers throw it on shore to remove the carcass and not double-count it the next day. The data collection is part of a long-term study looking at how bear predation affects sockeye salmon in this region.

When this effort began in the mid-1990s, Tom Quinn, a professor in the UW School of Aquatic and Fishery Sciences, decided that everyone should throw sockeye carcasses to the left side of the stream — facing downstream. They might as well be consistent, he thought, and who knows — maybe someday they could see whether the tossed carcasses had an effect on that side of the stream.

Twenty years later, Quinn and colleagues have found that two decades of carcasses — nearly 600,000 pounds of fish — tossed to the left side of Hansen Creek did have a noticeable effect: White spruce trees on that side of the stream grew faster than their counterparts on the other side…. Essentially, as they report in a paper published October 23 in the journal Ecology, the sockeye carcasses were fertilizing the trees.

This video illustrates what happened:

(Thanks to David Kessler for bringing the tree-bound dead salmon to our attention.)