The headline in the Los Angeles Times reads “Teen baked her grandfather’s ashes into sugar cookies and brought them to school, police say.” Does this count as cannibalism? 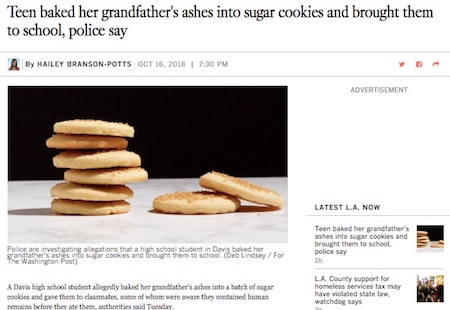 That research is described in the study “Assessing the Calorific Significance of Episodes of Human Cannibalism in the Paleolithic,” James Cole, Scientific Reports, vol. 7, no. 44707, April 7, 2017.

Questions of cannibalism and nutrition are, one might say, grandfathered into the Los Angeles news report.