The height of dogged dishonesty or honesty, when dogs urinate, gets analyzed in this new study: 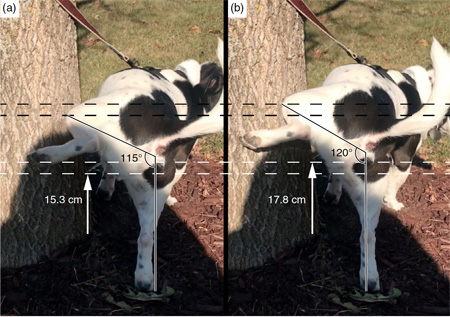 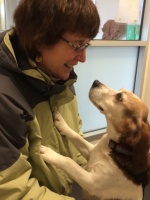 Via two studies, we tested the hypothesis that urine marking is a dishonest signal in adult male domestic dogs, which raise a hindlimb when marking vertical objects. In Study 1, we tested whether raised-leg angle (i.e., during a urination, the angle between a dog’s raised leg and the axis normal to the ground) is a proxy for urine mark height (n = 15 dogs) and, in Study 2, we tested whether small dogs exhibit larger raised-leg angles than large dogs (n = 45 dogs).

Our findings support raised-leg angle as a proxy for urine mark height and provide additional evidence that scent marking can be dishonest. Assuming body size is a proxy for competitive ability, small adult male dogs may place urine marks higher, relative to their own body size, than larger adult male dogs to exaggerate their competitive ability. We did not control for over marking, which also may explain our findings.

The study also says “Dogs set the pace of walks, explored freely, and investigated prospective marking targets as they pleased,” and points out an alternative, dog-honesty-heavy explanation for what’s happening:

Alternatively, over marking may explain our findings. Over marking is used by mammals to cover deposits by conspecifics in favor of displaying their own scent (Johnston, Chiang & Tung, 1994) and is a common behavior in dogs that may, in combination with adjacent marking (i.e., depositing a scent mark adjacent to that of a conspecific), constitute 63% of all urinations (Lisberg & Snowdon, 2011). If a large dog places a scent mark at the height of its hip, a small dog would need to place its urine higher, relative to its own hip, to over mark the large dog’s deposit. This requires the small dog to perform a larger raised-leg angle than the large dog (per Study 1). Compared to large dogs, small dogs will encounter more marks that are higher in relation to their own body size for them to over mark; this could explain the negative relationship between body size and average raised-leg angle.

(Thanks to Adam Marcus and Ivan Oransky for bringing this to our attention, and for pointing out that “fake news” has now become an issue with dogs.)