The All-Meat Diet was fictional when it was the centerpiece of “The Atkins Diet Opera” in 2004. Now someone is promoting the All-Meat Diet as a real diet for real people to follow.

That someone is Mikhaila Peterson. Stephanie Lee reports, in Buzzfeed:

Mikhaila Peterson, 26, is now making money off a new kind of diet that allegedly cured her depression and arthritis: all meat, all the time….

It’s the “carnivore diet,” the latest food trend to sweep the internet, and the 26-year-old swears that it cured her depression and rheumatoid arthritis. Yes, she admits, it “sounds absolutely insane,” there is no research to back it up, and she isn’t qualified to give medical diagnoses. But now she’s offering Skype “consultations” about the diet for about $90 an hour, following in her famous dad’s financial footsteps.

Her father is Jordan Peterson, the University of Toronto psychologist…

“The Atkins Diet Opera” premiered as part of the 2004 Ig Nobel Prize ceremony. This is the fanciful plot:

Dr. Atkins, observing cats munch on birds, invents the perfect diet regimen: eat only meat. Then, after becoming famous and rich, Dr. Atkins finds a way to top himself: he invents the Coffee Diet.

In Act 3, Dr. Atkins [played by Jason McStoots] sings about his All-Meat Diet. Here’s the second verse of that song (which is sung to the tune “An English Country Garden”):

You can see video of Jason McStoots singing the All-Meat Diet song, and you can read the entire libretto. Here’s an action photo, taken from the audience at the performance: 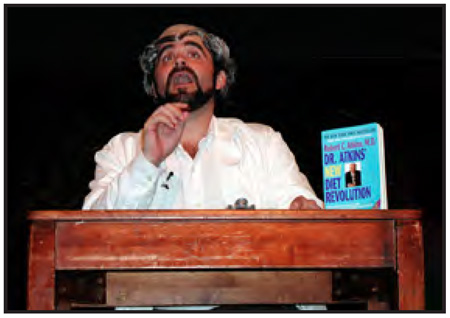 But enough about the opera. Back to reality: Mikhaila Peterson writes, on her web site, “Now I only eat beef, salt, and drink water.”

We of course wish good health and financial prosperity for Mikhaila Peterson, and for her all-meat-eating father, and for anyone else who ingests their advice!

BONUS: “Portrait of a Self-Recognized Genius: Jordan B. Peterson“