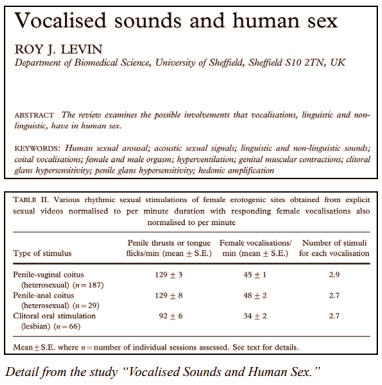 “[An] early study of the coital behaviour of a single Caucasian married couple (Fox & Fox, 1969)… highlights the complexity of the vocal behaviour of but one female, which may be highly idiosyncratic….

“Perhaps the oldest and fascinating, but so far unvalidated, documented account (El-Khalidi, 1970) of the diversity of vocalisations at orgasm, supposedly of 10 women of the female entourage of a 13th century Arabic physician (Al-Sayed Haroun Ibn Hussein Al-Makhzoumi), has been published from a claimed translated ancient Arabic document. The range included piercing screams (“Ayee”), groaning, moaning and crying, snorting, grunting, heavy breathing and speech vocalisations including repeated “Please, Please, Please” (because so much pleasure experienced), “Oh’s! and ah’s! “, “No, No, No” (could not believe the pleasure experienced) and “Faster, faster”. None of these would be out of place in a modern report, which of course may be the case if the document is a fake!…

“There is even less data about sounds made during the male orgasm than there is about the female…. Kinsey et al. (1948), in their study of the sexual behaviour of the human male, described the different reactions that occur in young males at orgasm into six categories.” 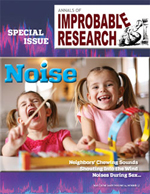 Read that and more, in the column “Improbable Sex” [free, downloadable PDF], in the special NOISE issue of the Annals of Improbable Research.

For heaps of improbable research, subscribe to the magazine (or if you like, buy single issues). The magazine has six new issues a year, all in PDF form.