The study is: “Ethological Observations of Social Behavior in the Operating Room,” Laura K. Jones, Bonnie Mowinski Jennings, Melinda K. Higgins, and Frans B.M. de Waal, Proceedings of the National Academy of Sciences,  no. 201716883, July 2, 2018. (Thanks to Philipp Weisser for bringing this to our attention.) The authors explain: 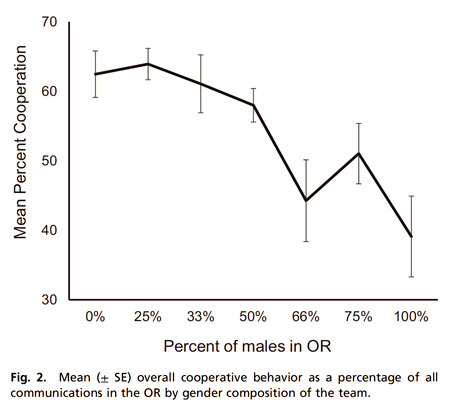 “Hierarchy and gender composition affect the balance of cooperation and conflict on surgical teams. In this investigation, behavior was quantified with methods traditionally used to study nonhuman primate groups. Observers used an ethogram to timestamp 6,348 spontaneous social interactions from 200 surgical procedures. Conflict and cooperation in the operating room [OR] showed a significant interaction effect with regard to professional roles (e.g., conflict was initiated mostly down the hierarchy between individuals several ranks apart) and by gender interaction (e.g., cooperation was better if the attending surgeon’s gender differed from that of the team majority)…. Instead of using post-hoc questionnaires, which are unreliable and often self-serving, we wanted to record actual behavior and relate it to hierarchy and gender. Our findings show that the OR is a microcosm of typical primate social tendencies.”

Katie Langen writes about the study, in Science magazine: “Yelling, cursing less likely to break out in operating rooms when female surgeons are present.”

The 2012 Ig Nobel Prize for anatomy was awarded to Frans de Waal and Jennifer Pokorny, for discovering that chimpanzees can identify other chimpanzees individually from seeing photographs of their rear ends.