People have devised many ways to try to remove the odor gifted by a skunk. This is one of them. It is one of the very few invented by people named Riddles. 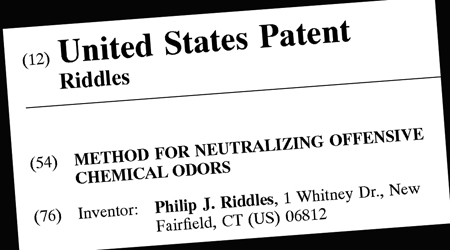 “Exposure to skunk spray is a great annoyance because of its very disagreeable and persistent odor due to low molecular weight thiols. The odor may persist for several days on anything contacted by the spray, e.g., wearing apparel, pets, personal articles, and the like. In particular, dogs are often exposed to the spray and become a nuisance when attempts are made to decontaminate them…. In accordance with the invention, the cleaning composition is applied to the affected area, for example, the area of an object sprayed by a skunk. The area is thoroughly shampooed with the cleaning composition and then either rinsed or wiped clean. The affected area is thereby neutralized of the disagreeable odor of the offensive chemical.”