Big Banks to Get Reprieve from Volcker Rule

Big banks are getting a big reprieve from a post-crisis rule aimed at curbing risky behavior on Wall Street.

Federal bank regulators on Wednesday unveiled a sweeping plan to soften the Volcker Rule, opening the door for banks to resume some trading activities restricted as part of the 2010 Dodd-Frank law. The changes would give the largest banks significant freedom to engage in more complicated — and possibly riskier — activities…

This may be designed to allow American banks to resume more of the kinds of activities that were celebrated in “The Big Bank Opera.” That opera premiered as part of the 2009 Ig Nobel Prize ceremony. Here’s video of Act 3, which gives the entire history of money and banks in a single song. (The tune is “Una voce poco fa” from the older opera, “Barber of Seville,” by Gioachino Rossini. The words are 21st century.):

You can also, should you be greedy, watch Act 1, Act2, and the thrilling concluding act, Act 4.

This photo from the opera’s premiere, shot by David Holzman, shows soprano Maria Ferrante in Act 3: 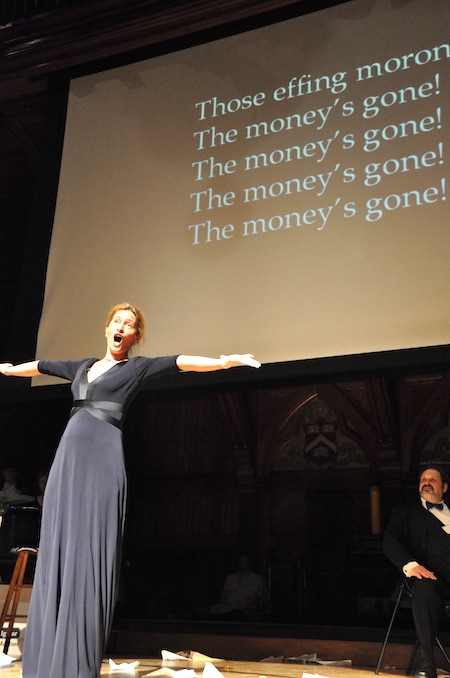 (SUMMARY OF THE OPERA’S PLOT: Swanky bankers celebrate themselves, the history of money, and the out-of-this-world rise of big banks. The big banks crash to earth. The bankers vituperate, with swank.)