Some of those who suffer the inconveniences of excessive ear-wax turn to a radical remedy – a fire-based process called ‘ear-candling’ [see diag.] 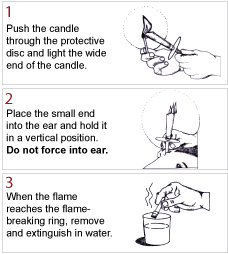 “Ear candles have been used for centuries and is [sic] considered a painless, inexpensive and non-invasive way to potentially remove ear wax that is easy to use in the privacy of your home.”

Not everyone though, is convinced of the safety of the treatment :

“In 2010, the FDA and Health Canada acted against manufacturers of ear candles. These actions have included import alerts, seizures, injunctions and warning letters. The authorities warn consumers of the potential risks:

● burns to the face, ear canal, eardrum and middle ear
● injury to the ear from dripping wax
● ears plugged by candle wax
● bleeding
● puncture of the eardrum
● delay in seeking needed medical care for underlying conditions such as sinus and ear infections, hearing loss, cancer and temporomandibular joint (TMJ) disorders. (TMJ disorders often cause headache and painful sensations in the area of the ear, jaw and face).”

Note : The paper cites ‘Happy Ears’ candles, the instructions for which are shown above.

BONUS (fire related) : Bob Newhart imagines a phone conversation between Sir Walter Raleigh and the head of the West Indies Company in England.