The famed Chinese cultural divide — wheat-centric in the north, rice-centric in the south — plays out even in today’s coffee shops, suggests this new study:

“Moving Chairs in Starbucks: Observational Studies Find Rice-Wheat Cultural Differences in Daily Life in China,” Thomas Talhelm, Xuemin Zhang, and Shigehiro Oishi, Science Advances, Vol. 4, no. 4, April 25, 2018: eaap8469. (Thanks to Minna Lyons for bringing this to our attention.) The authors, at Beijing Normal University, China, the University of Chicago, USA, and the University of Virginia, USA, explain: 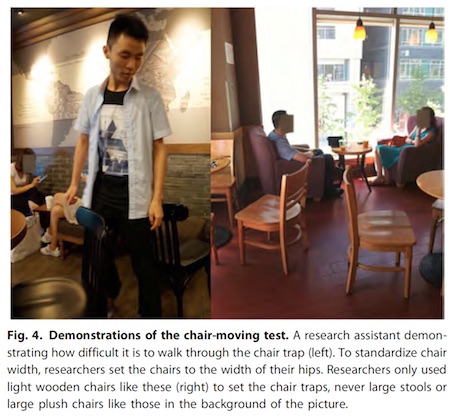 In Study 1, we counted 8964 people sitting in cafes in six cities and found that people in northern China were more likely to be sitting alone. In Study 2, we moved chairs together in Starbucks across the country so that they were partially blocking the aisle (n = 678).

This chart presents a featured finding from the study—that “People in wheat areas were about three times more likely to move the chair than people in rice areas”: 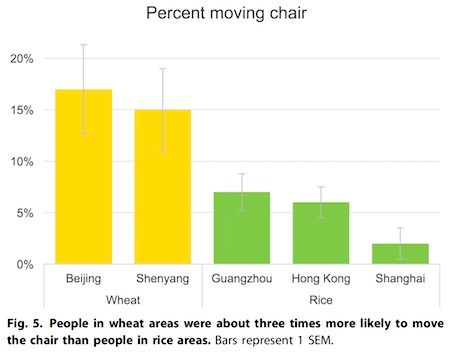