Last week, in the midst of the Ig Nobel EuroTour, we encounter this item—item #1— on a menu in a restaurant in Frankfurt, Germany: 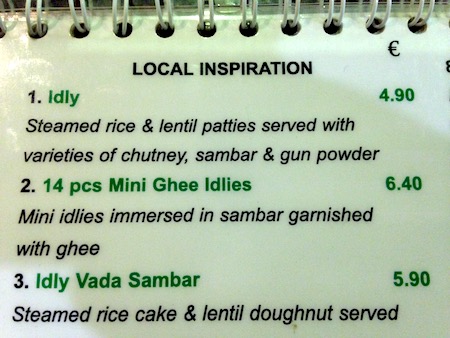 Our colleague Merry (“Corky”) White, a food anthropologist based at Boston University, tracked down an explanation of the most colorful named ingredient—gunpowder. The explanation, written by Priyadarshini Nanda, appeared in the NDTV Food blog, on June 12, 2015:

South India’s Spice Hero: How to Make the Famous Gunpowder

…The famous kandi podi from Andhra Pradesh or ‘gunpowder’ is made with equal measures (about half a cup each) of toor dal, moong dal, and chana dal, 10 red chillies, and one teaspoon of cumin seeds. All the ingredients are again dry roasted separately, and brought down to room temperature. Once cooled, it’s ground coarsely so that the textures of each of the ingredients remain distinct. It’s best served with a pouring of hot ghee atop steamed rice….

Gunpowder is normally eaten with rice and ghee. If it’s used with dosas and idlies, it’s usually mixed with oil. It can also be eaten with rotis and chapatis too. Chutney podi/pudi can be eaten with all of the above, and is used to tweak dishes as well. For instance, if you’re making tawa vegetables, you can sprinkle podi made with peanuts over it for added flavour. Some people even eat it on toast, smearing a bit of ghee and sprinkling some sugar along with it.