Nathan Mattise reports for Ars Technica about the Improbable Research session, which happened last week at the AAAS Annual Meeting. The report begins:

At this annual science conference, even humor has thorough research methods behind it.

AUSTIN, Texas—The American Association for the Advancement of Science (AAAS) Conference is an inherently serious event, filled with cutting-edge research from some of the world’s brightest scientific minds. But after hours, like any good conference, people in attendance can loosen their figurative ties… and have a good chuckle considering whether cats are liquids or solids. 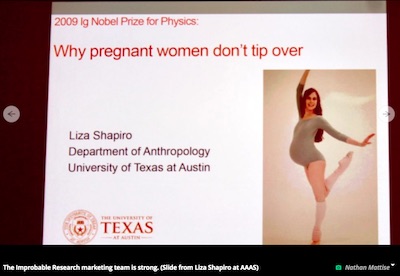 That kind of Saturday-night-ready research is the trademark of the Annals of Improbable Research, the journal and organization behind the yearly First Annual Ig Nobel Prize ceremony. That event has long been an Ars favorite as it honors research “that makes you laugh, then think” about topics like why dog fleas jump better than cat ones and why humans stink at carrying coffee. And at the latest AAAS conference in Texas earlier this month, the Improbable Research team brought together both visiting and Texas-local Ig recipients to elaborate on their award-winning research…. 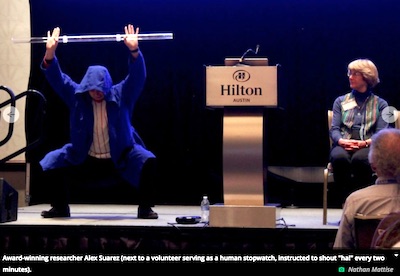 Mattise’s report in Ars Technica. included detailed analysis of three of the session’s presentations: using a didgeridoo to treat sleep apnea and snoring; why pregnant women don’t tip over; and whether the much-televised animal called “Barney” is or is not a dinosaur. 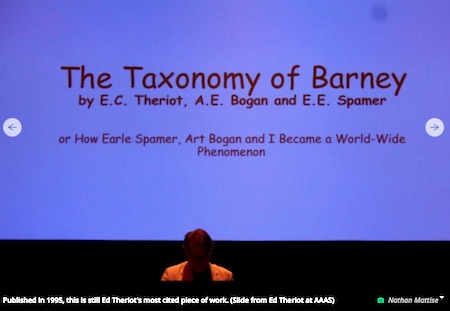