Even statistics researchers find that statistics can be— and sometimes are—tricky to use. A recent study by two mathematically-inclined marketing professors demonstrated that many statisticians get confused about (or ignore) some supposedly simple things:

“Statistical Significance and the Dichotomization of Evidence,” Blakeley B. McShane [pictured here, pouring coffee] and David Gal, Journal of the American Statistical Association, vol. 112, no. 519, 2017, pp. 885-895. The authors, at Northwestern University and the University of Illinois at Chicago, report: 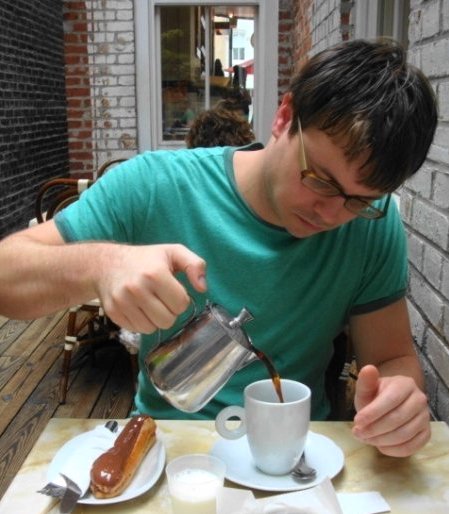 “In light of recent concerns about reproducibility and replicability, the ASA issued a Statement on Statistical Significance and p-values aimed at those who are not primarily statisticians. While the ASA Statement notes that statistical significance and p-values are “commonly misused and misinterpreted….” [Here we present] data showing, perhaps surprisingly, that researchers who are primarily statisticians are also prone to misuse and misinterpret p-values thus resulting in similar errors.”

Irineo Cabreros, an applied mathematician at Princeton University, wrote an appreciation of this study, and of larger issues of which it’s part. Cabreros’s article, called “Let the battle between human psychology and science have statisticians’ supervision,” is published in Massive.

If you download and read the McShane/Gal article, you will find, at the bottom of its final page, the beginning of an article called “A p-Value to Die For,” by Donald Berry of the Department of Biostatistics, University of Texas M. D. Anderson Cancer Center, Houston, Texas. Donald Berry does not like the McShane/Gal article (and if one judges from the style of writing, apparently does not like McShane and Gal), and explains in authoritative tones how and why he does not like it (and perhaps them).

A statistical-and-otherwise quarrel had erupted, with several scholars energetically taking part, and McShane and Gal publishing a “rejoinder.” If you enjoy statistics or scholarly quarrels, you might enjoy pursuing the participants and their arguments as they march and hop and publish into the future.