“Fishes caused Sweden to be afraid of being attacked by Soviet submarines in 1982” is a report by VN Express (in Vietnamese) about the secret incident that years later produced the 2004 Ig Nobel Biology Prize.

The central figures in the story: farting herring. It is an open question, biologically speaking, whether the herring do or do not use their farts (produced by expelling air from the swim bladder) to communicate.

Ig Nobel Prize winner Magnus Wahlberg tells the story, now that the official veil of secrecy is lifted, in this TEDx talk video:

This week [late December, 2017] brings news reports about the equivalent sound, produced by a different species of fish—a fish called croaker. The scientific study about this identifies it with these words: “The Gulf corvina (Cynoscion othonopterus) is a species of croaker (family: Sciaenidae) endemic to the Northern Gulf of California, Mexico.”

The Washington Post headline about this new study: “Biologists record the machine-gun sound of the loudest known fish.” The study itself is called “A sound worth saving: acoustic characteristics of a massive fish spawning aggregation,” published in the journal Biology Letters. The scientists (at the The University of Texas at Austin and the University of California San Diego) doing this new research apparently choose not to use the plain-language description “farting fish.” 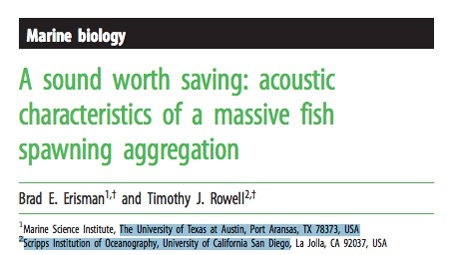 Magnus Wahlberg, the Ig-Nobel-winning co-author of the herring-fart-sound study that co-won that 2004 Ig Nobel biology prize, says (today) of these developments:

“It is very interesting to see how stories about fish sounds can keep rolling and rolling and rolling! There are more than 30,000 species of fish – and so far we have only listened to a handful of them. There is a lot more to find out. And some true enigmas: the goldfish has one of the most sensitive ears among all fish – but we never heard a goldfish ever say anything. So, what on earth are they listening for?”