Researchers from Utrecht University have an update on temperatures in hands that may, or may not, belong to you. Their paper, “No consistent cooling of the real hand in the rubber hand illusion,” gives an example of the importance of distinguishing body ownership:

“Consider a simple task such as walking towards another person –say, this huge big shot you noticed at a conference – and shaking hands… among this sea of moving limbs you will need to keep track of which ones are yours, so you can walk away again without making a complete fool out of yourself. To do so, your brain needs to know which parts of the world are “you” and which parts are not.” 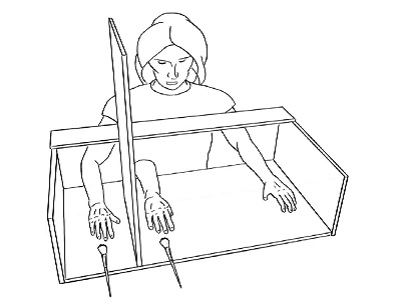 But what happens to the previously owned real hand? One highly cited experiment in 2008 suggested that when the real hand is disowned in favor of a rubber hand, the temperature of the real hand drops slightly. This sort of relationship with body ownership would have interesting consequences for physiology, but it has been difficult to replicate. The Utrecht University team decided to delve into the problem, using as many owned, and not owned, hands as possible.

In total, 167 participants were convinced to trade ownership of their hands for rubber hands. After extensive temperature measurements, the researchers found that: