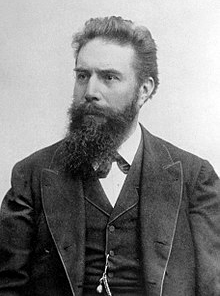 Known as the “Father of Radiology”, he discovered and investigated X-Rays while experimenting with vacuum tubes in 1895.  He named them "X-Rays" because they were an unknown form of radiation and he refused to patent his discovery.  He received the very first Nobel Prize in Physics (1901).  Other honors include a peak in Antarctica, a radioactive element (Rg), and a unit of measurement named in his honor.

Nov 8th, the anniversary of his discovery, is observed both as International Day of Radiology and also as World Radiography Day.

HAIR LEGACY
Images of Röntgen’s beard helped inspire Radiologist Philipp Weisser to grow his own beard, which in turn qualified him to join the hair club.

"…Last but not least, my beard is a homage to the Godfather of science in radiology, Wilhelm Conrad Röntgen."       – P. Weisser, LFHCfS

Mr. Weisser mentioned this inspiration when he joined the LFHCfS, prompting the club to investigate and decide that, yes, Röntgren did indeed have impressive facial hair!