An invention gives restaurant diners a possibly elegant way to dispose of their chewed chewing gum, and gives restaurants a new means of advertising themselves or anything else. The invention was marketed under the name “Gumvelope.” A patent application tells how Gumvelope works: 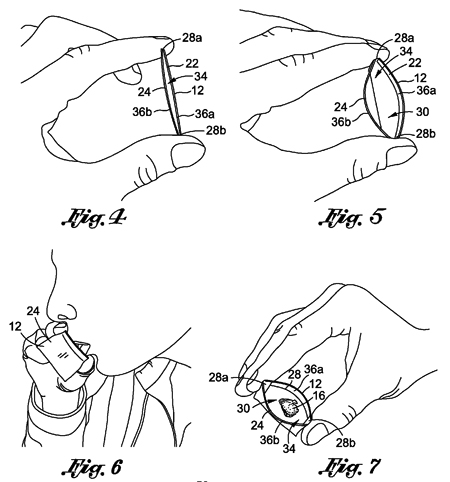 This instructional video demonstrates a Gumvelope in use by a gum chewer:

The birth of the Gumvelope comes from both Craig’s observation and personal practice. “While living in California,” Craig explains, “I began noticing that people in restaurants had no place to dispose of their used chewing gum. In the past, patrons have used linen napkins, straw wrappers, sugar packets and even disposed of their gum by placing it under the table. The problem with those methods of disposal is that they aren’t disposal. Instead, gum has to be painstakingly scraped off of the bottom of tables, which is time-consuming and costly, and disposing of gum in linen napkins simply ruins them. Additionally, there is the problem of having an unpleasant and sticky gum and paper mess sitting on the table as food is being served.”

Frustrated, Craig began thinking of ways to circumvent this ongoing problem. Her solution was a small, self-contained envelope—dubbed a Gumvelope®—In which used gum could be placed. Once sealed, the envelope could be sanitarily disposed of by wait staff or chewer, or temporarily saved and neatly placed in a pocket or purse.

This video shows the inventor explaining Gumvelope to an audience of potential investors. You may find that the sound recording quality is suboptimal:

The company organized to make and market Gumvelopes has apparently been disposed of:

A trademark for the name “Gumvelope” has also, apparently, been disposed of:

This video ad for Gumvelope lives on:

BONUS: Chewing gum inspires many inventors and scientists. Wads of their research cover the pages of the special Chewing Gum issue of the Annals of Improbable Research: 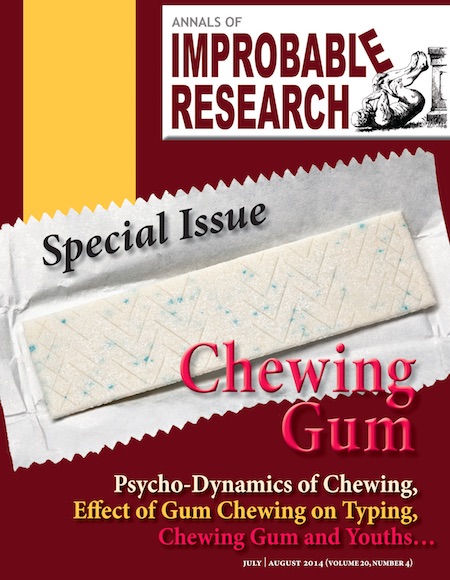 The issue includes a roundup of some of the research about the “Psycho-Dynamics of Chewing.”