“Normally the ‘Ig Nobel Prize’ is awarded to researchers who have strange, silly, or unimportant scientific research, but this startling revelation — that the legendary vampire bat has a taste for our blood — may have highlighted a serious health risk for people living in Central and South America.” 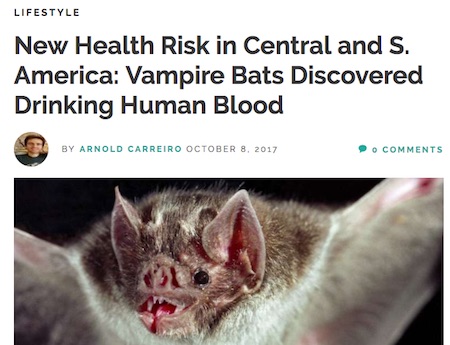 The 2017 Ig Nobel Prize for nutrition was awarded to Fernanda Ito, Enrico Bernard, and Rodrigo Torres, for the first scientific report of human blood in the diet of the hairy-legged vampire bat

REFERENCE: “What is for Dinner? First Report of Human Blood in the Diet of the Hairy-Legged Vampire Bat Diphylla ecaudata,” Fernanda Ito, Enrico Bernard, and Rodrigo A. Torres, Acta Chiropterologica, vol. 18, no. 2, December 2016, pp. 509-515.