This eight-page report is a practical guide for law enforcement officials:

“Dried genitalia are an important element of traditional medicine in many cultures around the world…. Wildlife law enforcement officers can learn to differentiate the various species sources of these products and detect genuine tiger penises from the abundant fakes currently being sold to unsuspecting tourists and consumers. 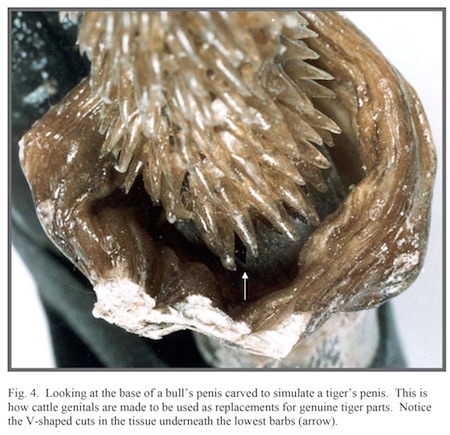 “In animal markets, some parts and products are not what they are labeled. One of the most difficult products to identify has been genuine dried tiger penises. The reason for this is the rarity of the real thing and a long tradition of the production of ‘lesser tiger’ or tiger substitute, that is, any other large mammal that can be promoted as a replacement for tiger. When rehydrated and consumed in a soup or tea, this product is believed to serve as an aphrodisiac or restorative tisane. To date, no dried penis from an actual tiger has been seen in the Lab as evidence in a wildlife case.”

The photo above, from the report, comes with this caption: “Fig. 4. Looking at the base of a bull’s penis carved to simulate a tiger’s penis. This is how cattle genitals are made to be used as replacements for genuine tiger parts. Notice the V-shaped cuts in the tissue underneath the lowest barbs (arrow).”

BONUS FACT: The 1992 Ig Nobel Prize for Art was awarded to to Jim Knowlton, for his classic anatomy poster “Penises of the Animal Kingdom,” and to the U.S. National Endowment for the Arts for encouraging Mr. Knowlton to extend his work in the form of a pop-up book.