Effective though Catnip (Nepeta cataria) might be – in causing cats to sniff, roll over, and undulate the skin on their back (amongst other things) – it only affects about 50% of cats. And usually has little or no impact on Tigers. A new study in BMC Veterinary Research, March 2017, compares Catnip with Silver Vine (Actinidia polygama) – or to be more specific, Silver Vine that has been parasitised by the gall midge Pseudasphondylia matatabi, producing fruit-galls.

The study found that not only was Silver Vine around 40% more likely to create an ‘intense’ response in cats – it has now been shown, for the first time, that it also dramatically affects Bobcats : 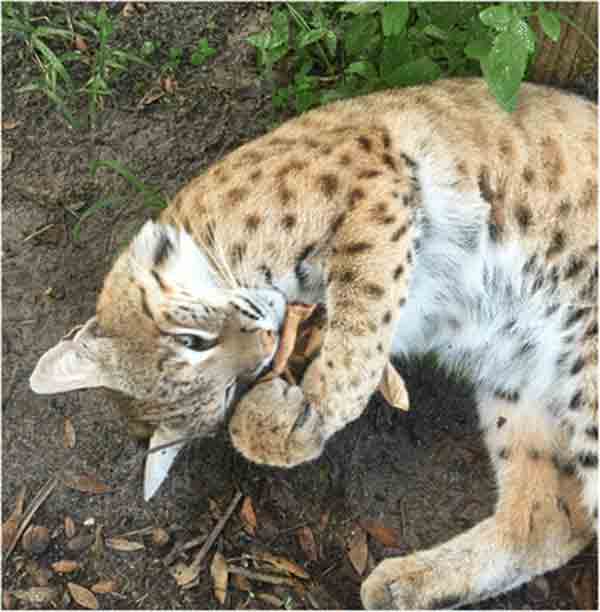 [The photo shows an eight year old female bobcat holding a paper bag containing Silver Vine powder between her forelegs, while she is rolling around and giving it chin and cheek rubs.]

The study contains this statement: “Unlike domestic cats, tigers were either not interested in silver vine or responded disapprovingly.”

Note: Although many of the active-ingredient chemicals have been identified and isolated, no-one has any idea why they affect felids in the ways they do.