Since then, investigations into the decay of beer froth have continued – and one experimental research project in particular has challenged the idea that it decays exponentially. A team from the Institut für Angewandte und Physikalische Chemie–Arbeitsgruppe Chemische Synergetik, Universität Bremen, Germany, “call in question the results presented by Leike”, saying that : 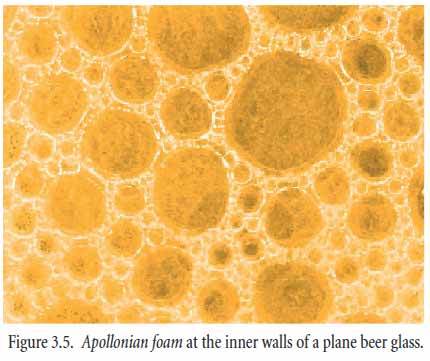 It is our finding that the foam volume does not shrink simple exponentially but in terms of higher order according to the equation lnV(t) = a−bt −ct2.5 (3.1). The term ct2.5 describes the reorganisation of the bubble arrangements which will lead to an Apollonian gasket of bubbles. [our emphasis]”

See: The Apollonian decay of beer foam bubble size distribution and the lattices of Young diagrams and their correlated mixing functions