Mahadevan, who won an Ig Nobel Physics Prize in 2007 for studying how/why wrinkled sheets become wrinkled, has a new study out about how/why bird eggs become bird-egg shaped. The study, by Mahadevan and several collaborators, is: 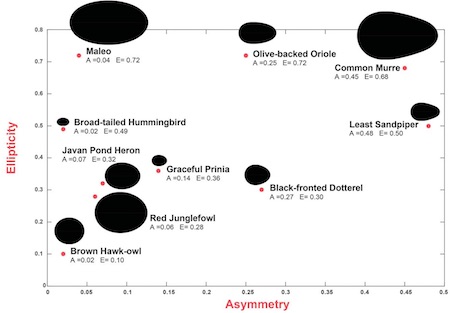 Ed Yong, writing in The Atlantic, savors the new paper:

Think about an egg and you’ll probably conjure up an ellipse that’s slightly fatter at one end—the classic chicken egg. But chickens are outliers. Hummingbirds lay eggs that look like Tic Tacs, owls lay nigh-perfect spheres, and sandpipers lay almost conical eggs that end in a rounded point. After analyzing hundreds of species, Stoddard showed that the most common shape—exemplified by an unremarkable songbird called the graceful prinia—is more pointed than a chicken’s.

“We mapped egg shapes like astronomers map stars,” Stoddard says. “And our concept of an egg is on the periphery of egg shapes.”

Beyond displacing chickens as the Platonic ideal of egg-dom, Stoddard’s data also helped her to solve a mystery that scientists have debated for centuries: Why exactly are eggs shaped the way they are?…

To solve it, Stoddard teamed up with L. Mahadevan, a biophysicist at Harvard University who has studied “how leaves ripple, how tendrils coil, and how the brain folds, among other things.” He realized that all eggs could be described according to two simple characteristics—how asymmetric they are, and how elliptical they are. Measure these traits, and you can plot every bird egg on a simple graph. They did that for the eggs of 1,400 bird species, whose measurements Stoddard extracted from almost 50,000 photos…

The Los Angeles Times report about this includes an appraisal by Charles Deeming, who himself was awarded a 2002 Ig Nobel Biology Prize for co-authoring the study “Courtship Behaviour of Ostriches Towards Humans Under Farming Conditions in Britain.” The LA Times writes:

Charles Deeming, an ecologist who studies bird reproduction at the University of Lincoln in England and who was not involved in the study, said that pelvis shape, in particular, could be critical in determining egg shape. With further research, he said, scientists may be able to narrow down a more specific link between bird anatomy and egg shape.