If a species of bird has a relatively small brain [compared to other avian species] is it likely to be less intelligent ? And, if so, might it be more likely to be involved in a traffic accident? A team from Ecologie Systématique Evolution, Université Paris-Sud, CNRS, AgroParisTech, Université Paris-Saclay, France and the House of Birdresearch, Taps, Christiansfeld, Denmark, decided to investigate by looking at the number of birds involved in fatal [i.e. for the bird] traffic accidents and comparing the brain sizes of victims :- 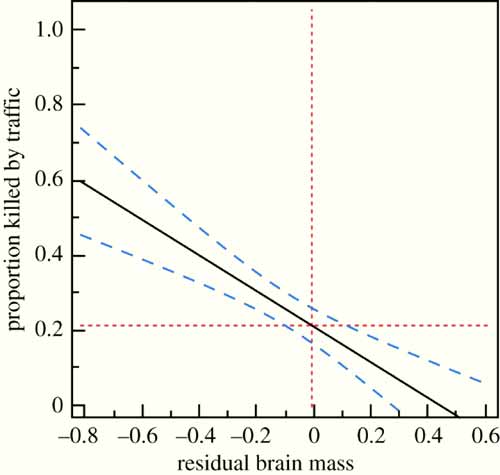 “In conclusion, birds killed by cars have disproportionately small brains for their body size. In contrast, there was no difference in terms of the size of the liver, heart or lungs. Both road kills and birds being shot had disproportionately small brains for their body size. These findings suggest that cognitive differences between dead individuals and survivors may be linked to individual differences in perception and adjustment to movement.”