A two-headed dolphin was rescued — rescued in the sense that the world now knows about it in some scientific detail — by Erwin Kompanje. Kompanje is a physician, medical ethicist, naturalist, and editorial board member of the Annals of Improbable Research. 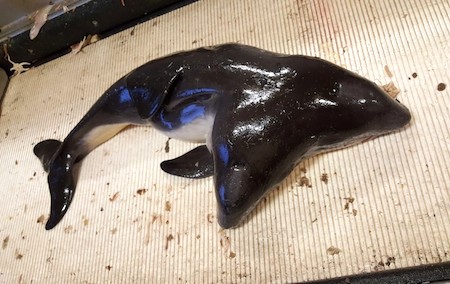 A photo of the thing began to circulate through the Netherlands — eventually to the inbox of Erwin Kompanje, the curator of mammals at the Natural History Museum in Rotterdam, who was astounded.

He recalled his first thought: “Where??”

Where was it, and how soon could he get it into a lab?

Even today, in an age of science, it might appear to many people to be a two-headed sea monster.

Kompanje knew better, though the truth was no less astounding. He was looking at photos of two conjoined harbor porpoises, newborns sharing a single body, a rarity among rarities in all the oceans in the world….

For a researcher hungry for any morsel of information about man’s aquatic mammalian cousins, it was a one-in-a-billion discovery.

So Kompanje got the boss of the fishing crew on the phone, who was helpful — providing the exact coordinates and details of the catch…. And just then, on the phone with the trawler boss, he learned the true end of this strange tale.

“They thought it was illegal to collect it,” Kompanje said. “They made four photographs and threw it back into the sea. Back into oblivion….”

Kompanje and colleagues wrote a study about the two-headed dolphin. That study has been published in the biology journal Deinsea: