The international campaign against adding flouride to public water supplies has just had a monkey wrench thrown into their works. A new study reports that flouride is in the beer supply, in considerable amounts. The study is:

“Beer as a Rich Source of Fluoride Delivered into the Body,” D. Styburski, I. Baranowska-Bosiacka, M. Goschorska, D. Chlubek, and I. Gutowska, Biological Trace Element Research, 2016, pp. 1-5. (Thanks to Ivan Oransky for bringing this to our attention.) The authors, at Pomeranian Medical University, Poland, report:

“Beer is the most popular alcoholic beverage in the world. Due to its prevalence and volume of consumption, it should be considered as a potential source of F- and taken into account in designing a balanced diet. Therefore, the aim of this study was to analyze beer samples in terms of F- levels…. When compared to imported beers, Polish beers were characterized by the lowest mean F- concentration (0.089 ppm). The highest mean F- concentrations were recorded in beers from Thailand (0.260 ppm), Italy (0.238 ppm), Mexico (0.210 ppm), and China (0.203 ppm). Our study shows that beer is a significant source of fluoride for humans, which is mainly associated with the quality of the water used in beer production.”

This chart, from the study, shows “Fluoride mean concentration and SD in beers from different countries. (Statistical significant differences p ≤ 0.05)”: 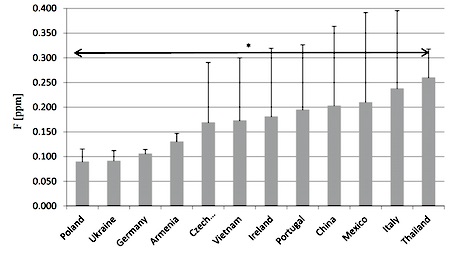 The vast weight of scientific investigation finds that small extra amounts of flouride improves public health. But… anti-flouride campaigners worry that adding flouride to public water supplies —though intended to help improve the teeth and bones of the people who drink that water — might in some way instead poison everyone. That worry is deep-seated:

The disturbing there’s-flouride-in-our-beer newsdifficulty for the anti-flouridation forces comes not long after seemingly happy news: a study showing that chocolate and tea might be better than flouride at protecting teeth. That study is:

“Theobromine: A Safe and Effective Alternative for Fluoride in Dentifrices,” Nakamoto Tetsuo, Alexander U. Falster, and  William B. Simmons, Jr., Journal of Caffeine Research. vol. 6, no. 1, February 2016, pp. 1-9. The authors, at Louisiana State University Health Sciences Center and at the Maine Mineral and Gem Museum, Bethel, Maine, explain:

“During the process of studying caffeine’s effects on developing teeth, a serendipitous discovery was made. Teeth comprise hydroxylapatite (HAP). Ingestion of caffeine (1,3,7-trimethylxanthine) caused the formation of smaller crystallites of HAP in the developing teeth. This resulted in the increased release of calcium and phosphorus ions from the enamel surface when exposed to acidic solutions in vitro. Furthermore, animal study confirmed the hypothesis that smaller HAP crystallites caused the increased incidence of dental caries. In contrast, theobromine (3,7-dimethylxanthine), which is similar to caffeine, caused formation of larger HAP crystallites in vitro. The ingestion of theobromine by lactating dams showed a decreased release of calcium and phosphorus ions from the enamel surface in the developing teeth of neonates in vivo. The use of fluoride dentifrices is controversial. It is also well documented that young children who brush their teeth often ingest fluoride-containing dentifrices. Based upon our comparative study between fluoride and theobromine, theobromine is a better alternative than fluoride. We believe that theobromine can be used as an ingredient of dentifrices and even if swallowed accidentally, there are no adverse effects.”