A new study called “Hydrodynamics of Defecation,” published in the research journal Soft Matter, emerges from the same laboratory at Georgia Tech that produced the Ig Nobel Prize-winning study “Duration of Urination Does Not Change With Body Size.” The earlier, urination study was published in the Proceedings of the National Academy of Sciences.

Co-authors Patricia Yang and David Hu shared the Ig Nobel Prize for biology, in the year 2015, as did their urination co-authors Jonathan Pham and Jerome Choo. In the new, defecation study, Yang and Hu are joined in co-authorship by Morgan LaMarca, Candice Kaminski, and Daniel I Chu.

Here’s detail from the new study:

The above three-part illustration shows:

(A) The relationship between body mass M and the mass flow rates of food intake and excreted feces. Symbols represent experimental measurements, and dashed lines represent best fits to the data. (B) Schematic of the flow rate of energy in mammals. (C) Pie chart of the distribution of energy intake.

The authors introduce the underlying mathematics of their work with another simple illustration. They explain: 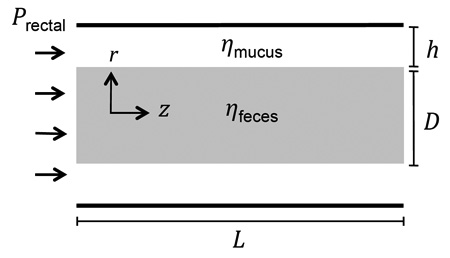 We present a mathematical model for defecation. Our system consists of a pipe whose length consists of the rectum and the colon, illustrated [here]. We model cylindrical feces of diameter D and total length L, consisting of several pieces joined like sausages. The walls of the cylinder are coated with a mucus layer of thickness h, which is considerably less than D. We parameterize the motion of feces and mucus using cylindrical coordinates…  in which z represents the horizontal direction along the cylinder and r the radial direction from the center of the feces to the walls.

The paper reduces the entire flow of its argument into this dense nugget:

Animals discharge feces within a range of sizes and shapes. Such variation has long been used to track animals as well as to diagnose illnesses in both humans and animals. However, the physics by which feces are discharged remain poorly understood. In this combined experimental and theoretical study, we investigate the defecation of mammals from cats to elephants using the dimensions of large intestines and feces, videography at Zoo Atlanta, cone-on-plate rheological measurements of feces and mucus, and a mathematical model of defecation. The diameter of feces is comparable to that of the rectum, but the length is double that of the rectum, indicating that not only the rectum but also the colon is a storage facility for feces. Despite the length of rectum ranging from 4 to 40 cm, mammals from cats to elephants defecate within a nearly constant duration of 12 ± 7 seconds.

The Ig Nobel Prize citation for the earlier, urination study, explains that that earlier study tested “the biological principle that nearly all mammals empty their bladders in about 21 seconds (plus or minus 13 seconds).” The results of the new study, combined with the results of the new study, provide an enriched understanding of how mammalian output functions relate to time.

UPDATE: New Scientist magazine made a short video (and did a writeup) about this, complete with background excretion music:

UPDATE: Co-authors Patricia Yang and David Hu write about their research, in The Conversation: “Physics of poo: Why it takes you and an elephant the same amount of time“