TODAY IN OSLO: In front of an audience at the University of Oslo (UiO), The Luxuriant Hair Club for Scientists (LFHCfS) proudly announced its 2017 Woman of The Year – Dr. Anneleen Kool.

Dr. Kool was in attendance to discuss her research on the botanical history of the Vikings and to display her luxuriant flowing hair to the audience. She also brought a few of her hair-notable colleagues up on stage and encouraged the audience to join the club, if they have the scientific and hair qualifications.

Dr. Kool studies the plants that Vikings used, how they used them, and how those plants moved through Viking territory. As the Curator of the Viking Botanical Garden in Oslo, Dr. Kool grows many of these plants and displays them for the public.

Her Woman of the Year page includes her original nomination photo (on a camel in Wadi Rum, Jordan), more information about her work, and several more photos of her hair. She has been a member of the club since 2012.

The 2017 Man of The Year – Experimental Physicist Prof. Corvin Covault – was announced in January in Boston, Massachusetts. 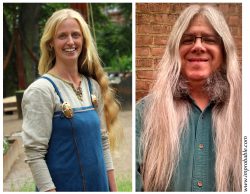 A Rare Award
This is only the 5th time that the Luxuriant Flowing Hair Club for Scientists has chosen a Woman and Man of the Year.

Past and Future Members
The Luxuriant Flowing Hair Club for Scientists accepts membership nominations (including its sibling clubs, for scientists who formerly had luxuriant flowing hair, or who have luxuriant facial hair). The clubs currently have over 550 members around the world. New members are announced first in the Improbable Blog, and later collected into annual member galleries.