The Luxuriant Flowing Hair Club for Scientists (LFHCfS) proudly announced its 2017 Man Of The Year back in January. Now it proudly announces WHEN it will announce the 2017 Woman of the Year.

2017 MAN of The Year – an Experimental Physicist at Case Western Reserve University, researching cosmic rays – was announced on Friday, January 13th from the stage at Arisia. His name is Prof. Corbin Covault.
(Learn more about Man-of-The-Year Corbin Covault).

2017 WOMAN of The Year will be announced on March 24th at the University of Oslo Ig event (4:00pm start time). She will be there to display her luxurious flowing hair, and to make any remarks she wishes to make about her research, her hair, and what she thinks of the Woman of the Year title. 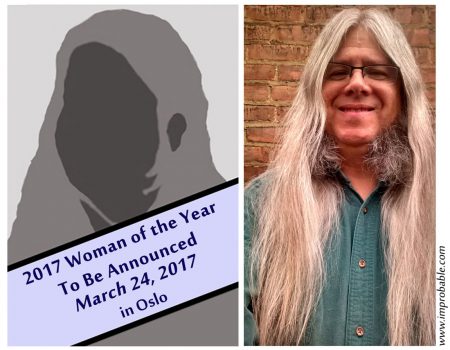 Scientists with luxuriant hair have been with us for millennia. Find more details on club members, on the Historical Honorary Members, and on how to become a member yourself, all in the LFHCfS website.