One of NASA’s best noses got a good writeup in 2003, in an official bulletin called “NASA’s Nose: Avoiding smelly situations in space“: 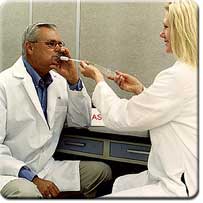 Thanks to George Aldrich and his team of NASA sniffers, astronauts can breathe a little bit easier. Aldrich is a chemical specialist or “chief sniffer” at the White Sands Test Facility’s Molecular Desorption and Analysis Laboratory in New Mexico. His job is to smell items before they can be flown in the space shuttle.

Aldrich explained that smells change in space and that once astronauts are up there, they’re stuck with whatever smells are onboard with them. In space, astronauts aren’t able to open the window for extra ventilation, Aldrich said.

The Know I Know web site, too, recently took a look at the smelling situation.