Deceased animals in a range of compromising poses share cautionary stories of times when wildlife interactions with humans turned deadly — for the wildlife — in the unusual exhibit “Dead Animal Tales” at the Natural History Museum Rotterdam (NHMR) in the Netherlands.

Recently, NHMR welcomed a new addition to the exhibit: a stone marten (Martes foina) that met its end Nov. 20, 2016, after it bumbled its way into a substation at the European Organization for Nuclear Research (CERN) in Geneva, Switzerland…. 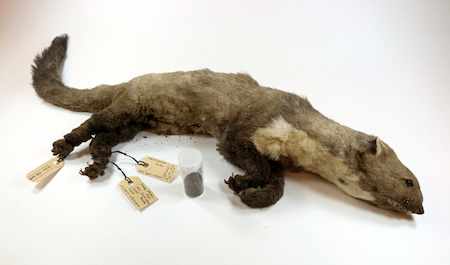 …Not many exhibits can say they began with homosexual duck necrophilia — but this one can. The specimen that launched “Dead Animal Tales” was a mallard that suffered a fatal collision with a window at the museum in 1995. Almost immediately afterward, another mallard approached and began having sex with the dead bird.

Exhibit curator and NHMR director Kees Moeliker wrote a study about the highly unusual behavior, which earned him the Ig Nobel Prize — an award for thoughtful research that also inspires laughter — in 2003.

“Thanks to the Ig Nobel Prize that my First-Case-of-Homosexual-Necrophilia-Paper won, the story of that poor bird became widely known and people wanted to see and admire the duck,” Moeliker told Live Science in an email….

UPDATE: Rebecca Hersher interviewed Kees for NPR’s “The Two-Way”: “World’s Most Destructive Stone Marten Goes On Display In The Netherlands“