Step-by-step, practical instructions for how to prepare a moth to drive a tiny automobile. That’s what this video shows, and the accompanying paper describes: 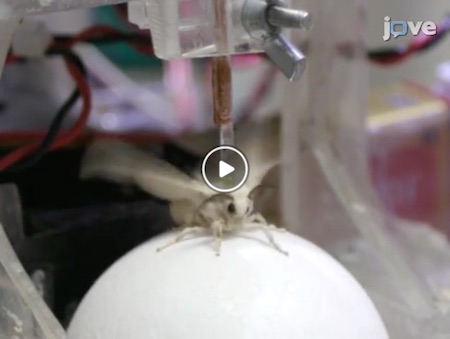 It’s all published formally as: “Insect-controlled Robot: A Mobile Robot Platform to Evaluate the Odortracking Capability of an Insect,” Noriyasu Ando, Shuhei Emoto, and Ryohei Kanzaki, Journal of Visualized Experiments, no. 118, December 2016, e54802. The authors are at the University of Tokyo. They explain:

“we have developed an insect-controlled robot in which a male adult silkmoth (Bombyx mori) drives a robot car in response to odor stimuli; this can be regarded as a prototype of a future insect-mimetic robot. In the cockpit of the robot, a tethered silkmoth walked on an air-supported ball and an optical sensor measured the ball rotations. These rotations were translated into the movement of the two-wheeled robot. The advantage of this “hybrid” approach is that experimenters can manipulate any parameter of the robot, which enables the evaluation of the odor-tracking capability of insects and provides useful suggestions for robotic odor-tracking.”

BONUS: Michael Price wrote it up for Science magazine, with the headline “Watch this moth drive a scent-controlled car.”

BONUS (somewhat related): The 2005 Ig Nobel Peace Prize was awarded to Claire Rind and Peter Simmons of Newcastle University, for electrically monitoring the activity of a brain cell in a locust while that locust was watching selected highlights from the movie “Star Wars.” (They describe that research, in the study “Orthopteran DCMD Neuron: A Reevaluation of Responses to Moving Objects. I. Selective Responses to Approaching Objects,” F.C. Rind and P.J. Simmons, Journal of Neurophysiology, vol. 68, no. 5, November 1992, pp. 1654-66.)