In real life, so to speak, does the brain keep on keeping on for a while after death? A newly published study, written by notably adventurous academics, says that yes, the brain can and does, kinda sorta:

“When Is the Brain Dead? Living-Like Electrophysiological Responses and Photon Emissions from Applications of Neurotransmitters in Fixed Post-Mortem Human Brains,” Nicolas Rouleau, Nirosha J. Murugan, Lucas W.E. Tessaro, Justin N. Costa, Michael A. Persinger, PLoS ONE, vol. 11, no. 12, December 2016, e0167231.  (Thanks to Dany Adams for bringing this to our attention.) The authors, at Laurentian University, Canada, explain:

“The structure of the post-mortem human brain can be preserved by immersing the organ within a fixative solution. Once the brain is perfused, cellular and histological features are maintained over extended periods of time. However, functions of the human brain are not assumed to be preserved beyond death and subsequent chemical fixation. Here we present a series of experiments which, together, refute this assumption. Instead, we suggest that chemical preservation of brain structure results in some retained functional capacity. Patterns similar to the living condition were elicited by chemical and electrical probes within coronal and sagittal sections of human temporal lobe structures that had been maintained in ethanol-formalin-acetic acid…. these results suggest that portions of the post-mortem human brain may retain latent capacities to respond with potential life-like and virtual properties.”

Co-author Persinger has made his mark many ways in and about academia.

This photograph of Professor Persinger appears in the January 10, 2016 issue of The Star. The photo was taken by Nicolas Rouleau, another co-author of the zombie brain paper. 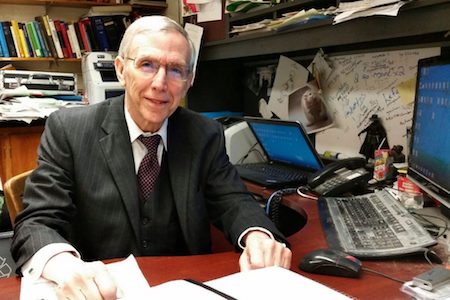 The article that accompanies that photo in The Star begins:

Professor Persinger and Professor Rouleau recently reported seeing signs of learning in a ball of dough.

BONUS (related to the brain activity study): The 2012 Ig Nobel Prize for neuroscience was awarded to Craig Bennett, Abigail Baird, Michael Miller, and George Wolford, for demonstrating that brain researchers, by using complicated instruments and simple statistics, can see meaningful brain activity anywhere — even in a dead salmon.