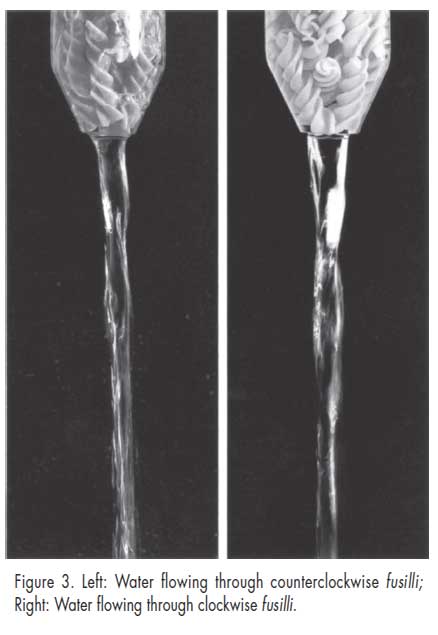 “Our experience of explaining polarimetry to the general public is that they frequently ask how molecules rotate light, which is difficult to explain using non-technical language. Therefore we were keen to find an analogous large scale system which mimicked the polarimeter and used everyday left- and right-handed objects.”

– explain Claire Saxon, Scott Brindley, Nic Jervis, Graeme R. Jones, E. David Morgan, and Christopher A. Ramsden of the School of Chemistry and Physics, Lennard-Jones Laboratories, Keele University, UK. Between them, they have developed the world’s first “Pastarimeter” – inspired by an idea from the late Nobel Laureate Sir Robert Robinson, OM PRS FRSE, whom, whilst working at the University of Sydney in 1914, had shown that short lengths of left- or right-handed screw threads packed into a tube would rotate a stream of water flowing down the tube – perhaps in some ways analogous to the way that chiral molecules rotate light.

“We are now pleased to report that we have succeeded in repeating this experiment and confirming Robinson’s observations. The major stumbling block in the past has been the availability of a left- and right-handed threaded material with a suitably deep thread. We have now found a remarkably cheap and disposable source in our local supermarket in the form of pasta fusilli. Surprising as it may seem, these are available from various retailers in both left- and right-handed forms.”

• Note: Their paper notes an interesting example of how identical molecules – identical that is except for the direction in which they twist – can have wildly differing properties. They cite the case of carvone – a molecule which tastes of spearmint when it twists in one direction and caraway in the other.

• Also see: Pasta’s place in the history of superconductivity

• Also don’t miss: ‘A taste for anelloni’ from the University of Warwick, UK (using Möbius pasta to illustrate the mysteries of ring-shaped polymers).

See Nuclear Pasta (a type of degenerate matter found within the crusts of neutron stars) at Wikipedia :

“When the gnocchi phase is compressed, as would be expected in deeper layers of the crust, the electric repulsion of the protons in the gnocchi is not fully sufficient to support the existence of the individual spheres, and they are crushed into long rods, which, depending on their length, can contain many thousands of nucleons. Immersed in a neutron liquid, these rods are known as the spaghetti phase. Further compression causes the spaghetti phase rods to fuse, and form sheets of nuclear matter. This is called the lasagna phase.”