“Ajax, through Athena’s spite, slipped upon some offal that was lying there from the cattle which Achilles had slaughtered in honor of Patroklos, and his mouth and nostrils were all filled with cow dung.” 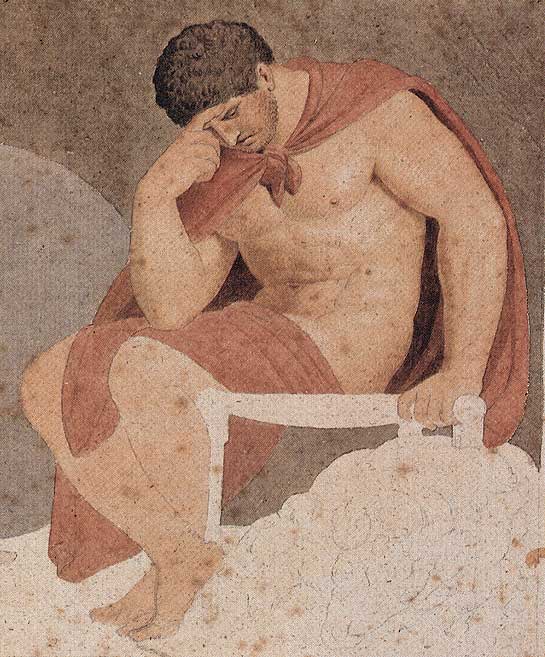 The account above is from The Iliad – in which Homer relates how Odysseus prays to the goddess Athena to request that Ajax [pictured, dejected *] loses a racing competition. Since then, many have asked whether it’s ethically justifiable to ‘pray to win’ at sports – even irrespective of whether it works or not. Some say that simply having an ‘intent to cheat’ is in-itself unsporting. Prof Anthony J. Kreider, for example (Miami Dade College, US) explains his viewpoint in a paper for the Journal of the Philosophy of Sport :

“It can be seen that prayers for assistance are unsporting by examining cases of other, similar kinds of unfair (though non–divine directed) requests for assistance. A cyclist who attempted to gain an advantage over her rival by asking her manager to shoot out the rival’s rear tire with a BB gun would be attempting to cheat. A similar cyclist who suggested that his coach should push him up a steep incline at an unobserved location on the course would be attempting to cheat as well.

Requests for divine assistance differ from these kinds of cases only in the individual of whom the assistance is asked, and this difference is not an important moral difference. Requests for God to help one make it up a hill (say, by God granting one additional strength, or by God causing a stiff breeze to be at one’s back, or whatever) are as much attempts at cheating as the above. Similarly, asking God to intervene in a manner that interferes with one’s opponent’s efforts (say, by causing the lead rider to have a flat tire) is also attempting to cheat.”

See: ‘Prayers for Assistance As Unsporting Behavior ‘in: Journal of the Philosophy of Sport, Volume 30, 2003 – Issue 1. (A full copy in Word™ format [.doc] may be found here)

Note: Improbable wondered if any empirical experiments have been conducted to ascertain whether ‘praying to win’ might work or not – apparently there haven’t – many thanks to professor Kreider for his assistance with information.

* It’s not really Ajax – just an artist’s impression (by Asmus Jakob Carstens) of what he might possibly have looked like had he (or if he) existed.

Coming soon: ‘How to ‘cheat’ at sport without really ‘cheating’ – part 2