“The observatory crotch peep platform is being installed, a lot of tourists to experience the crotch peeping.” — one highlight from NHK Zero’s TV report about the 2016 Ig Nobel Prize winners. 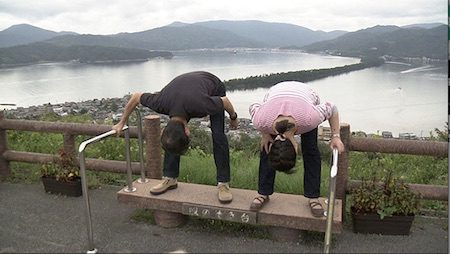 The image you see here, from the TV program, shows how people have been influenced by the winner of the 2016 Ig Nobel Prize for perception. That prize was awarded to Atsuki Higashiyama and Kohei Adachi, for investigating whether things look different when you bend over and view them between your legs.

They documented their research, in the study “Perceived size and Perceived Distance of Targets Viewed From Between the Legs: Evidence for Proprioceptive Theory” [by Atsuki Higashiyama and Kohei Adachi, published in the journal Vision Research, vol. 46, no. 23, November 2006, pp. 3961–76].