“So-called ‘trash films’ do not stand in opposition to taste and education. Quite the contrary, they are often watched by people with an above-average education and interest in culture.” – informs a recent online article from Max-Planck-Gesellschaft, München, Germany. The ‘delight-in-cheapness’ they are referring to is analysed in a paper for the journal Poetics Volume 57, August 2016, pp. 40–54 : it’s entitled ‘Enjoying trash films: Underlying features, viewing stances, and experiential response dimensions’.

Authors Dr. Keyvan Sarkhosh and Prof. Dr. Winfried Menninghaus of the Max Planck Institute for Empirical Aesthetics, Frankfurt, Germany, conducted an online survey presented to regular consumers of trash films. Films that were associated with the notion of trash and mentioned by at least 5% of the participants are shown in this table : 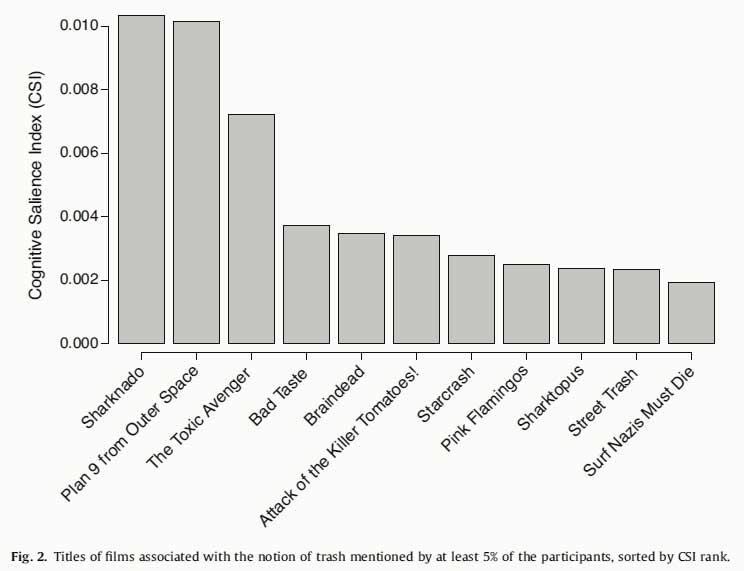 “Our study contributes to a better understanding of how particular audiences express a distinctive cultural taste by enjoying and appreciating specific cultural objects which deviate from the mainstream standard.”

Note: The late Don Featherstone, 1996 Ig Nobel prizewinner, was the creator of the plastic pink flamingo which played a prominent role in (the title of) John Waters’ movie Pink Flamingos (1972)  – number eight in the trash list.