Don Featherstone, the creator of the plastic pink flamingo, died this morning. He was a friend, whom we have known since 1996, the year he was awarded the Ig Nobel Prize for art. 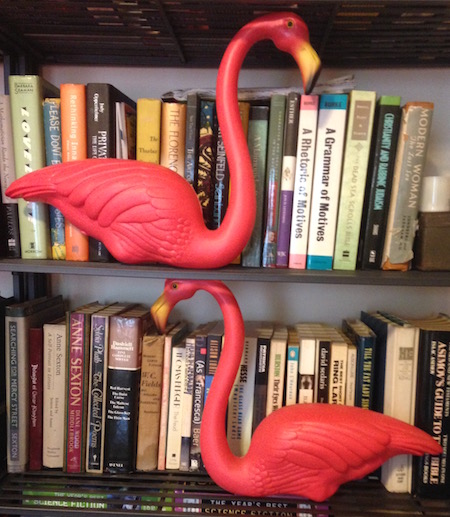 Don and his wife, Nancy Featherstone, came to almost every Ig Nobel Prize ceremony in succeeding years, where adoring throngs cheered them and the plastic pink flamingos. He has been ill the past few years. This photo shows Don and Nancy (who, every day of their marriage, wore matching outfits designed by Nancy) at the last of Don’s many happy returns, in 2012: 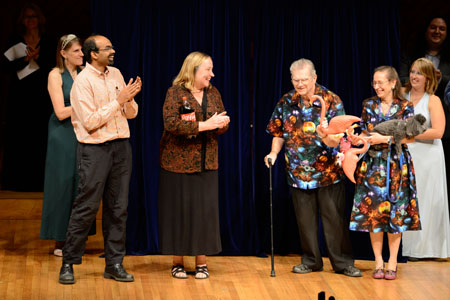 Eventually he became president of the company. After Don retired, dire things were done, by his successor, to the flamingo, triggering a worldwide protest, which eventually led to a more or less happy rallying of the forces of Good, and a restoration of the plastic pink flamingo’s status. In 2011, the flamingo attained new heights, when the Disney movie Gnomeo and Juliet featured a plastic pink lawn ornament named “Featherstone”. Don and Nancy were feted at the film’s premiere.

The flamingos inspired the film that launched John Waters‘s directorial career: Pink Flamingos. The flamingos also inspired the birth of several businesses that supply flamingoes en mass, as surprise visitors to the lawn of a beloved or despised neighbor. One of those businesses produced this tribute/promotional video, in 2008:

Don Featherstone was a happy, kind, and thoughtfully imaginative man, who became famous for his goofiest, tackiest creation. It was “goofiest” and “tackiest” by Don’s own reckoning — he was a richly talented artist, but felt that, given the fame and financial security the flamingo brought him, he ought to publicly act as if he were interested only in making happy goofy, plastic art. In 2012, Abigail Tucker wrote a history of the flamingo’s effect on the world, in Smithsonian magazine, with the headline “The Tacky History of the Pink Flamingo.”

Please think of Don, and raise a smile, whenever you see a flamingo, be it plastic or of some less physically durable species.

(The photo above shows two of the flamingos Don donated to the Improbable Research museum.)

UPDATE: Reader Scott Valla suggests: “Everyone please stand in your yard on one leg for a moment of silence.”