Have you ever calculated your chances of being allowed to participate in an event? As at least one study demonstrates, you might be surprised.
The 100th International Four Days Marches Nijmegen, the world’s most famous walking event, took place last month. Over 40,000 people participated, and there are various ways that somebody can be allowed to participate in this march in a given year. As Antoine Amarilli, Marc Beunardeau, Rémi Géraud, and David Naccache demonstrated mathematically using probability theory (see their recent preprint) when pondering the rules in 2013, until a recent rules change, the best chance of being allowed to participate in the 100th event would occur if one failed that year’s event. See the transition graph below from Fig. 1 of their paper. 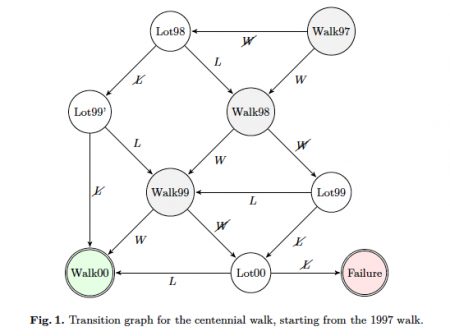