Many thanks to Dr. Victor Cardenes of the Department Geology and Soil Science at Ugent, Belgium, who provides us with a photo of a music CD being colonised by Geotrichum candidum (or a near relative). 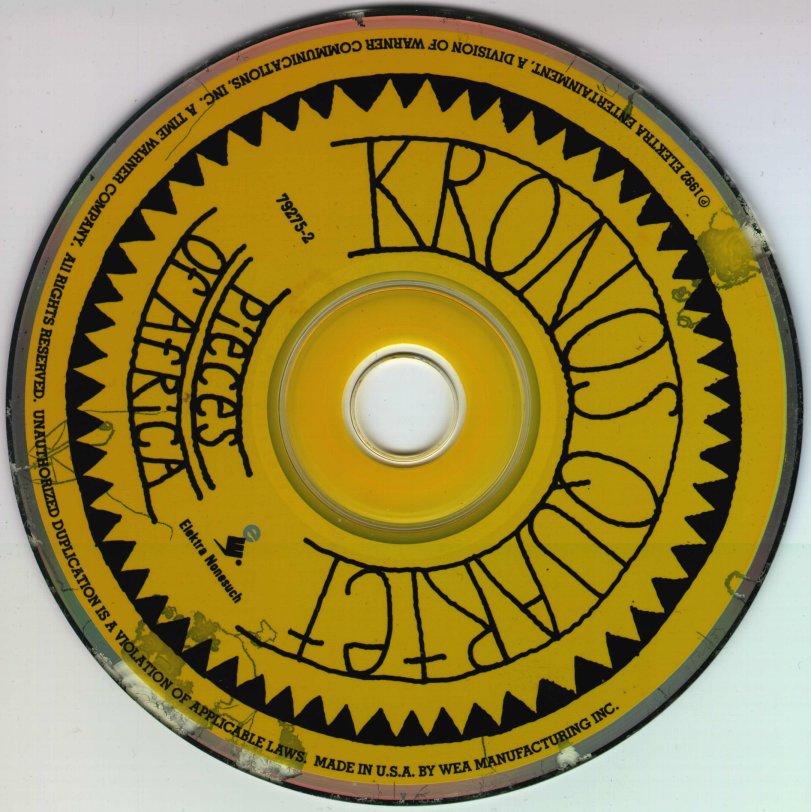 Whilst working in Belize, Dr. Cardenes noticed that a CD ‘Pieces of Africa’ by the Kronos Quartet, showed mysterious markings that looked distinctly biological in nature. [see bottom left-hand quartile in the photo above].

“At that time I didn’t know what was going on on the CD, I’m a geologist and know little about fungus […]. At the Spanish Museum of Natural History we did some research (mostly SEM). We already realized that the tracks were biological, so we looked for a biologist. The Center of Biotechnology in Madrid took the CD and I didn’t see it any more. They did fungi cultures and fancy experiments that I would never understand.”

The results of the experiments were documented in a 2001 paper for the journal Naturwissenschaften, 88(8):351-4, entitled: ‘Fungal bioturbation paths in a compact disk’ [full paper with more photos]. The research team noted implications for those involved in data archiving based on CDs or DVDs :

“The fact that intense biodeterioration in CDs, destroying the information pits, has been caused by a common fungus (a species close to G. candidum) leads to speculation on the future of compact disks as a secure persistent storage medium for sound, image and computer files.”

BONUS Dr Cardenes alerts us to Stanislaw Lem‘s science-fictional world described in his novel ‘Memoirs Found in a Bathtub’ in which a virus, begins destroying paper on Earth, reducing (almost) all human records to mounds of grey, powdery ash.

Question [optional] If CDs can be attacked by fungi, might other polycarbonate items also be at risk – riot shields, ocarinas, and/or iPhone 5c cases etc.?