“Traditional chicken soup was prepared according to a family recipe, which will be referred to as ‘Grandma’s soup’ (C. Fleischer; personal communication; 1970). This recipe is as follows:
• 1 5- to 6-lb stewing hen or baking chicken;
• 1 package of chicken wings;
• 3 large onions;
• 1 large sweet potato;
• 3 parsnips;
• 2 turnips;
• 11 to 12 large carrots;
• 5 to 6 celery stems;
• 1 bunch of parsley; and
• salt and pepper to taste.
Clean the chicken, put it in a large pot, and cover it with cold water. Bring the water to a boil. Add the chicken wings, onions, sweet potato, parsnips, turnips, and carrots. Boil about 1.5 h. Remove fat from the surface as it accumulates. Add the parsley and celery. Cook the mixture about 45 min longer. Remove the chicken. The chicken is not used further for the soup. (The meat makes excellent chicken parmesan.) Put the vegetables in a food processor until they are chopped fine or pass through a strainer. Both were performed in the present study. Salt and pepper to taste. “

The soup was prepared and used in a 2000 study by Barbara O. Rennard et al., of the Pulmonary and Critical Care Medicine Section, Nebraska Medical Center, Omaha, US, to evaluate if it could be regarded as a remedy for symptomatic upper respiratory tract infections. More specifically, whether it might inhibit neutrophil migration using the standard Boyden blindwell chemotaxis chamber assay with zymosan-activated serum and fMet-Leu-Phe as chemoattractants. 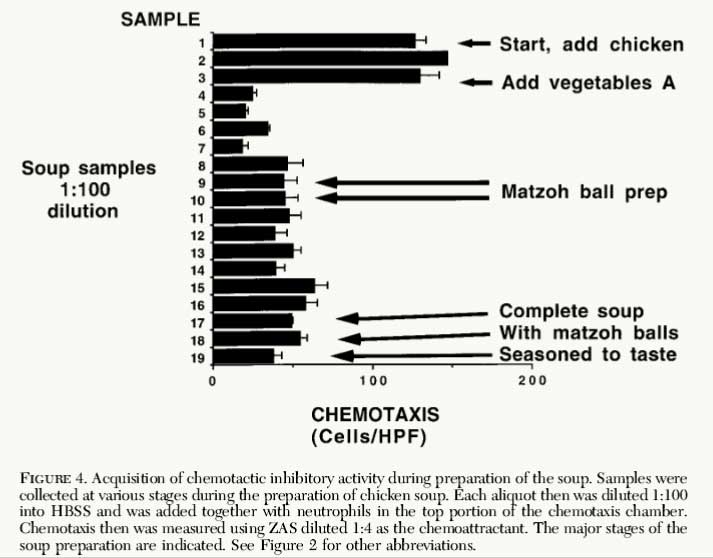