This CTV news report shows Ig Nobel Prize winner Troy Hurtubise, some years ago, testing one of the many increasingly-sophisticated suits of armor he developed to protect himself against grizzly bears. In this report, Troy, wearing the suit, was strapped to the front of an automobile, and the car was then driven head-on into a brick wall. This image is from the news report. Click on it, and be transported to the CTV web site, where you can watch the report, and Troy, unfold: 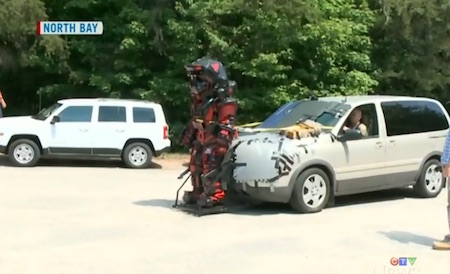 Troy enjoys a huge following of admirers and prospective imitators. It’s rumored that there could some day be a television series starring Troy, in which Troy would take on all comers in a series of intriguingly dangerous situations (such as being tossed into the Bering Sea to see who could survive the longest). This rare video (below) appears to be a pilot for that TV series.

Troy has already, of course, been the star of a hit documentary film, Project Grizzly:

And Troy authored a hit book, which includes among its many delights hints of Troy’s relationships with members of the British royal family.