This invention made it convenient both to swagger and to measure with exactitude:

“The use of swagger sticks is a military custom. They are carried by officers during drills and parades. Other than its limited value as a pointer or the like the conventional swagger stick is primarily a symbol or vestment of command having no particular utilitarian value.

“The present invention is directed to provision of an improved swagger stick which does have utilitarian value, particularly so with respect to the constant problem of training military personnel to drill and parade with the proper interval maintained between ranks. While a skilled drill leader develops considerable judgment as to the determination of a 40 inch interval, many new officers and even many of the more experIenced ones lack that judgment and even when possessing it would prefer to demonstrate authoritatively and visually to the men the required spacing for a 40 inch interval. The present invention provides a convenient means incorporated in or comprising the improved swagger stick for quickly gauging a 40 inch interval. It also permits quickly reconverting the swagger stick to its conventional compact length (i.e., slightly under two feet) and form for ordinary usage.”

Here’s detail from the patent: 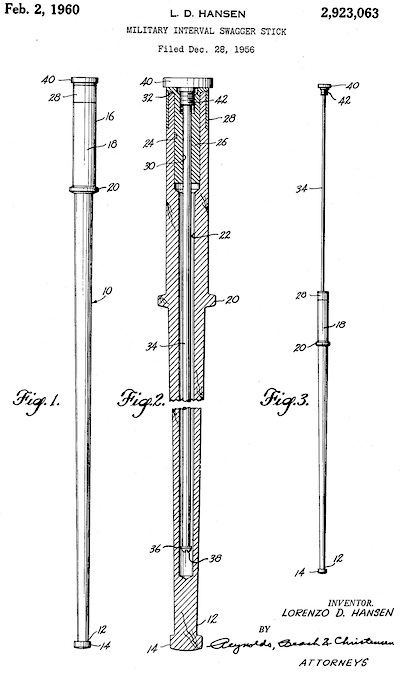