When a mobile telephone lodges in a person’s stomach, it can cease to be quite so mobile. A new medical paper offers proof of that:

“An Ingested Mobile Phone in the Stomach May Not Be Amenable to Safe Endoscopic Removal Using Current Therapeutic Devices: A Case Report,” Obinna Obinwa, David Cooper, and James M. O’Riordan, International Journal of Surgery Case Reports, vol. 22, 2016, pp. 86–89. (Thanks to Tim Radford for bringing this to our attention.) The authors, at the Adelaide and Meath Hospital, Dublin, Ireland, report:

A 29-year old male prisoner was brought in by ambulance to the Emergency Department with a four-hour history of vomiting, having claimed to have swallowed a foreign object six hours earlier that day….

The failure of endoscopy to remove the mobile phone, in this case, highlights the limitations of this approach. The traditional sequence of conservative approach, endoscopy and surgery when endoscopy fails is challenged. This observation has raised a new question: should clinicians proceed directly to surgery when clinical observation fails in these cases or should endoscopy still be attempted? 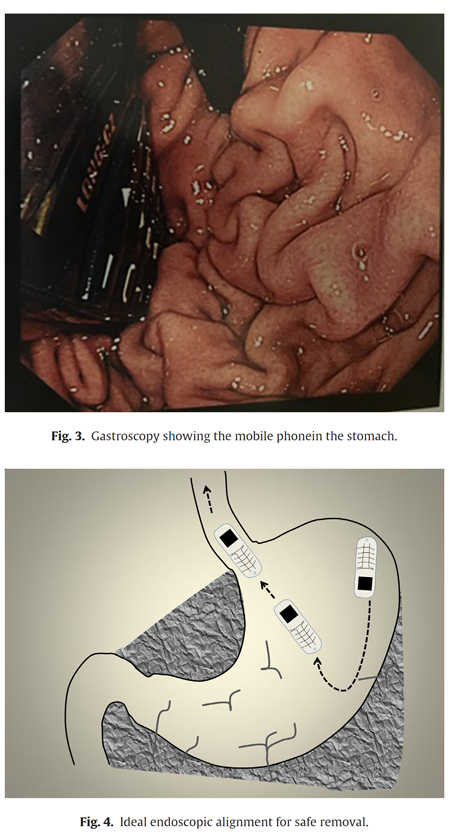 BONUS: The video below, prepared by persons not connected with the medical case described above, tells “How to track your mobile phone anywhere in the world”: