This new study explains, maybe, why so many people feel overwhelmed in navigating a big city by metro or bus. The study is: 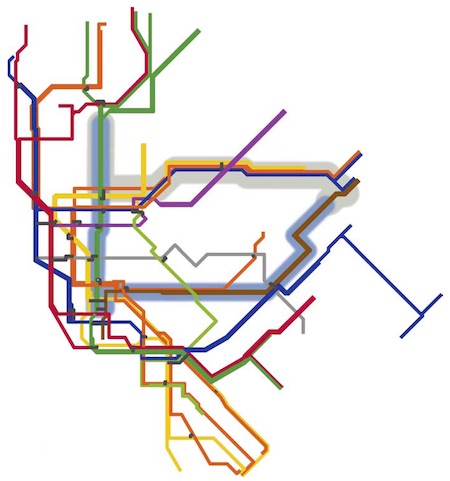 “Cities and their transportation systems become increasingly complex and multimodal as they grow, and it is natural to wonder whether it is possible to quantitatively characterize our difficulty navigating in them and whether such navigation exceeds our cognitive limits. [Evidence] suggests the existence of a limit associated with cognitive overload and caused by a large amount of information that needs to be processed. In this light, we analyzed the world’s 15 largest metropolitan networks and estimated the information limit for determining a trip in a transportation system to be on the order of 8 bits. Similar to the ‘Dunbar number,’ which represents a limit to the size of an individual’s friendship circle, our cognitive limit suggests that maps should not consist of more than 250 connection points to be easily readable… In large cities such as New York, Paris, and Tokyo, more than 80% of the trips are above the 8-bit limit. Multimodal transportation systems in large cities have thus already exceeded human cognitive limits.”

BONUS: Mason Porter is a member of the Luxuriant Flowing Hair Club for Scientists.