Military life is not all glory, Riddle and Tribble and colleagues remind us in this study:

“Historically, the most common medical problem faced by deployed military troops has been diarrhea… To assess the impact of diarrhea on operational effectiveness, soldiers who were systematically selected from around Iraq and Afghanistan to participate in the rest and recuperation program at Camp As Sayliyah in Doha, Qatar, were asked to complete a questionnaire…. Despite modern preventive medicine efforts, diarrhea rates remain high, and the impact of illness remains a threat to military efficiency.” 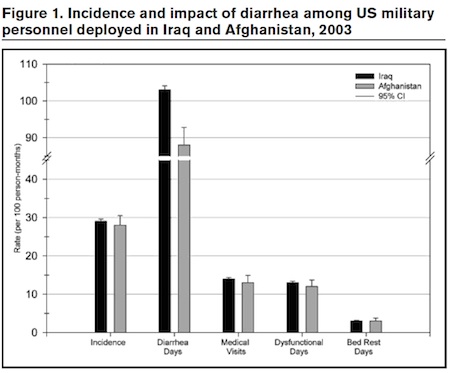 BONUS:  The 2004 Ig Nobel Prize for biology was awarded to W. Brian Sweeney, Brian Krafte-Jacobs, Jeffrey W. Britton, and Wayne Hansen, for their breakthrough study, “The Constipated Serviceman: Prevalence Among Deployed US Troops,” and especially for their numerical analysis of bowel movement frequency. [Published in Military Medicine, vol. 158, August, 1993, pp. 346-348.]